Fenugreek is cultivated as a spice crop. Both its seeds and small plants are used in food. Its green leaves are used in food as a vegetable. The grain is used as a spice in medicine, cosmetics and pickles. Besides, fenugreek seeds are also used for feeding animals. The use of fenugreek provides relief from many stomach related ailments.

Fenugreek seedlings are one to two feet long. Which looks like a bush. The tropical climate is ideal for fenugreek cultivation. For its cultivation, fertile soil with proper drainage is required. So its seedlings need normal temperature to grow. In India, fenugreek is grown mainly in Rajasthan and Gujarat.

If you are also thinking of cultivating fenugreek, today we will give you complete information about its cultivation.

Properly drained sandy loam soil is ideal for fenugreek cultivation. So it cannot be cultivated in waterlogged black heavy soil. Because if water is stagnant, its plants get damaged. Soil pH for its cultivation. Value must be between 5.5 and 7.

It is cultivated with rabi crops. Its trees do not need much rain. The winter season is best for fenugreek cultivation. Its seedlings grow easily in winter. Its trees can tolerate some amount of frost in winter. During the ripening of soybeans, moisture builds up, causing major damage to the crop. Because if there is moisture, soybeans start breaking and cracking.

Initially, the plant needs a normal temperature for germination. After the plants have grown, a temperature of about 15 to 20 degrees is suitable for growth. High temperatures are good for growing beans. This reduces the moisture content of the grain.

There are several improved varieties of fenugreek. Which are taken in different places to get more product.

Root rot disease is rarely seen in this species of fenugreek. This variety of fenugreek is widely grown in Rajasthan and Haryana. Trees of this species are tall. The seeds ripen about 140 to 150 days after planting. The leaves of this type of plant are dark green in color. And the color of its seeds is golden yellow. The yield of this species is 17 to 18 quintals per hectare.

This is the early variety of fenugreek. Its seedlings are ready for harvest about 70 days after sowing. Its trees are of normal height. The yield of this species has been found to be around 8 quintals per hectare. 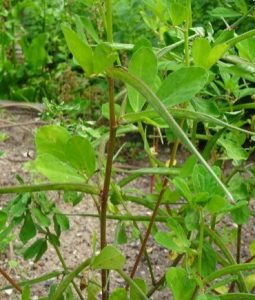 Fenugreek seedlings are ready about 130 to 140 days after sowing. Whose yield is around 20 quintals per hectare. If planted by the farmer in the form of green leaves, his seedling can get three cuttings. Its seeds are large in size and thick. Which has a less bitter taste.

Fenugreek plants are ready to ripen in about 140 to 150 days after sowing. This type of plant does not show powdery mildew disease. The yield of this species is found to be around 15 quintals per hectare. Its seeds look yellow. Which look normal in size.

Fenugreek pods of this variety are prepared by ripening together. Trees of this species look dwarf. The seeds are ready for harvest about 100 days after planting. The yield per hectare is around 13 to 15 quintals.

Apart from this there are many other castes. These include Hisar Suvarna, AFG-2, 3, Hisar Madhavi, RMT-143, Co-1 and Pusa Kasuri.

For fenugreek cultivation, the remnants of old crop in the field should be destroyed at the beginning and the soil should be left open for a few days after deep plowing with inverted plow. Then apply manure or old manure in the form of organic manure and mix it in the soil. Then water the field. After threshing, when the topsoil starts drying, the soil should be loosened by running a rotavator in the field. Then plow the field.

Method and timing of seed sowing

Fenugreek seeds are sown by drill and sprinkler method like other cereal crops. Before planting its seeds, they should be treated with bavistin. One hectare of seed drill requires 25 to 30 kg of seed for sowing and 35 kg of seed for spraying.

When sprayed, its seeds are sprinkled on the flat soil. After that, the field is plowed twice by the cultivator. So its seed goes down three to four centimeters in the soil. So its seeds are sown in a row by drill. Spacing 25 to 30 cm in each row. And the rows should have a distance of about 10 cm between its seeds.

Fenugreek is cultivated along with rabi crops. In the meantime, its seeds should be sown from mid-October to mid-November. Seeds can be sown till late November for late planting. It is cultivated with kharif crop in some states of South India. Which is used only in the form of its green leaves.

Fenugreek trees do not require much irrigation. But the moisture content of the field should be sufficient at the time of seed germination. Therefore, if there is no moisture in the field at the time of germination, light watering should be given. Otherwise, the plants are first watered about a month after sowing the seeds. Fenugreek plants need only 5 to 6 waterings. After first watering of fenugreek plants, the remaining water should be given at intervals of 20 days. After the pods are formed in the plants, retaining moisture improves the shape of the seeds. So there is a difference in his income.

Fenugreek cultivation generally requires fertilizers. When preparing the field for planting, about 10 to 12 carts of old manure should be thrown in the field and mixed well in the soil. In addition, one bag of NPK is used as chemical fertilizer. This amount should be sprinkled in the field during last plowing.

Plant diseases and their prevention

Fenugreek plants show many diseases. If left unmanaged, they can be left astray and lose the right path.

Waterlogging in fenugreek cultivation causes root rot disease. Which is a soil disease. Outbreaks appear to be exacerbated during this time. Thiram or Captan should be sprayed on the roots of the plants to control the disease.

Chepa disease is also called Mhow. The pests of this disease are very small in size. The colors of these insects are green, black and yellow. These kits are found in a group on plants. Which absorb the sap from the soft parts of the plant and stop the growth of the plant. As a result, the production of fenugreek has come down drastically. Proper application of Monocrotophos or Dimethoate should be done on the plants to control the disease.

Powdery mildew is also called shadow disease. Fenugreek plants cause shade disease due to fungus. This causes white spots on the leaves of the trees. As the disease progresses, all the leaves of the plant turn white. Therefore, plants stop the process of photosynthesis. And their development stops. Apply adequate amount of soluble sulfur or carotene on the seedlings to control the disease.

Fenugreek seedlings are ready for harvest about 130 to 140 days after sowing. During this time the leaves of the trees turn yellow. And the grains found in the beans turn yellow. And the moisture in the grain is also very low. Its seedlings should be cut close to the ground. After harvesting, collect it in the field and dry it. After the crop dries, the grain is taken out with the help of machine. A farmer can sell at a good price in the market.

The average yield of different varieties of fenugreek was found to be around 12 quintals. The wholesale market price of which is around Rs. 5,500 per quintal. According to this, a farmer earns more than Rs. 50,000 per hectare at a time.

How to cultivate Kalonji – Kalonji farming

How to make advanced cultivation of Fennel – complete information!

How to make advanced cultivation of cumin – complete information