Nectrin is an exotic fruit. Which is now being cultivated in India. Its fruit looks red like an apple. And its fruit tastes like peaches and raisins. In India, it is grown in cold regions. It is better to eat its fruits fresh. Its fruits contain many types of nutrients. Which are very good for the human body. In addition to eating its fruit, it is used in the form of jams, jellies, juices and dried and canned. Its trees are generally found up to 20 feet in height.

Nectrin can be grown in both temperate and subtropical climates. The winter season is best suited for fruit ripening. By the way, its plants grow well in normal climates. Its cultivation does not require much rain. For its cultivation, sites of 800 to 1600 m height are most suitable.

If you are also thinking of cultivating it, today we are going to give you complete information about its cultivation.

Nectrin can be grown in any type of soil. But for good growth of plants, it is more beneficial to grow in sandy loam soil with proper drainage. They can also be grown in well drained soils. The pH of the soil for its cultivation. The value should be approx.

Both temperate and subtropical climates are suitable for cultivation of nectarines. It can be grown in cold regions, where the climate is not very hot in summer and it stays cold for a long time in winter. Its trees get much colder in winter. But winter frosts are detrimental to its cultivation. Special care is taken for rainfall and altitude while planting. Rainfall during flowering and fruit formation is not good for its cultivation.

Its seedlings require normal (between 20 and 25) temperatures for early growth. After the growth of the plant, it thrives at a minimum of 10 से C in winter and a maximum of 28 C in summer.

There are several advanced species of nectrin. Which are taken on a seasonal basis to get more produce. Some of its varieties are currently being grown in India. These include Quartet, Snowquin, SunGrand, Sunlight, Cherokee, Anaquin, Late Le Grand, Sunrise and SunRip. There are several types that are not found in the kernel. The production of non-kernel plants appears to be high. And its fruits are good to eat in fresh form. And the fruits of the varieties in which kernels are found can be dried and stored well.

Nectrin seedlings are planted by making pits in the field. Therefore, after leveling the land, the pits are made in a row by keeping proper spacing in the field. When making its pits, keep a distance of 20 feet in each pit. And the distance between each line should also be about 18 to 20 feet. When making its pits, each pit should be about two to two and a half feet wide and one and a half feet deep. These pits are prepared one to two months before planting.

Peach seedlings are used for seedling preparation by grafting method. For this, peach trees are planted in the nursery. Then, when the plants are about two feet long, after cutting their tops, plant the nectarine seedlings and tie them tightly with polythene. Apart from this, seedlings are also prepared by tying the gutter. You can find out more about this in our article.

Nectrin seedlings are planted by making another small pit in the middle of the pits prepared in the field. Appropriate amount of Bavistin should be applied on the small pits prepared before transplanting. So that they do not get any disease at the time of germination of seedlings. After the pits are treated, plants are planted in them. After transplanting, light soil should be spread around the roots and pressed by two to three centimeters. 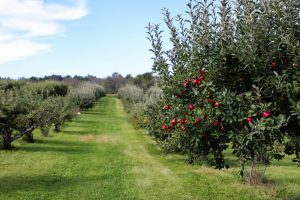 Nectrin plants can usually be transplanted in any season. But when planting as a crop, it is better to plant its seedlings in the spring. In addition, its seedlings can be easily planted from mid-December to mid-February.

When nectarine plants appear to be fully vegetative, they do not require much irrigation. Its fully grown plants need only four to five waterings a year. Its trees flower and should not be irrigated while the plants are dormant. Its plants remain dormant from December to January. When the fruit is ripe, it should be watered more.

Nectrin plants need common fertilizer. So that plants and fruits can grow well. Initially before planting, when preparing the pits, about 10 to 12 kg of organic manure should be mixed with the old manure in each pit. It is better to use organic manure for its cultivation. But farmers who want to use chemical fertilizers in addition to organic fertilizers should initially apply 50 gm of NPK as chemical fertilizer. Add this quantity and mix it in the soil.

Seedlings should be fertilized at the rate of two to three years in the initial period. Then, when the tree begins to bear fruit, increase the amount of fertilizer. At the age of 10 years, apply about 15 to 20 kg of organic manure and about 200 g of NPK per plant per year. The standard should be given. Full grown plants should be given 25 to 30 kg of organic and half a kg of chemical fertilizers every year.

The roots of its trees are spread far and wide. For this reason, to fertilize his plants, first make a circle about half a foot deep and one to one and a half meters wide at a distance of about two feet from the trunk of the tree. In this circle the amount of fertilizer should be mixed with soil and given to the plants. One to one and half months before flowering, apply nectrin fertilizer to the seedlings. Water the plants immediately after fertilizing.

With good care of nectrin plants, more produce can be obtained from them. For this, its seedlings need to be taken care of only after transplanting. After planting, when the seedling starts to grow, do not allow any kind of branch to grow up to one meter on the stem of the tree. This makes the trunk of the tree stronger and the shape of the tree visible.

Then, when the tree begins to bear fruit, cut off any unwanted branches that may appear on the tree. In addition, diseased and dried branches should be cut and separated. So new branches are born on the tree. Therefore, there is a difference in the yield of trees. Fruits should be harvested when the plants are dormant after harvesting.

Weed control should be done naturally in Nectrin plants. When weeding in a natural way, about a month after transplanting, remove weeds that appear in the roots of the plants and cover the plants. The weeds that appear near the trees should then be removed at intervals of about two to three months.

Apart from this, no crop has been grown on the open space of the field. And when weeds appear in the field after rains, light plowing should be done with power tiller or other equipment. So that the weeds born in the field are destroyed.

Yield starts three to four years after planting of Nectrin seedlings. In the meantime, the farmer can cultivate a variety of orchards, vegetables, spices or cereals in the open space of his farm. As a result, the farmers get income from their land and they do not have to face any financial problem. When planting horticultural crops between seedlings, keep in mind that only seedlings should be planted in the field which do not have much effect on the roots of nectarine plants. This is because the roots of nectrin plants do not go deep into the soil.

Nectrin plants have a large number of fruits, so not all fruits grow well. For this reason its fruits are pruned. Pruning should be done in April or early May after fruiting. During fruit picking, weak fruits that are well developed should be removed, except for light large fruits. This prevents the tree branches from breaking as they do not weigh much. And the quality of the fruit is good. The market price of which is good for the farmers.

Nectrin fruits are stalkless. For this reason, its fruits should be carefully harvested. Its fruits are ready for harvest in about 5 to 6 months after flowering. Its fruits are picked around the month of June. Carefully pick the ripe and slightly ripe fruits at harvest time.

Fruits are harvested after harvest. In which they should be distinguished from well-ripened and under-ripe fruits. Less ripe fruits can be easily transported by farmers over long distances. Farmers can sell the best ripe fruits at the nearest market. This protects their fruit from spoilage.

Nectrin seedlings begin to bear fruit three years after planting. Its fruit looks like an apple. But the taste is similar to peach and potato fever. So people love this fruit. Fruit production from each of its trees starts completely after about 10 years. Farmers can use the fruits by crowning and drying them. The wholesale price of this fruit is around Rs. 50 per kg in the market. So the farmers earn a lot. It is also used as a dried fruit box.

How to cultivate mulberry for Silk farming